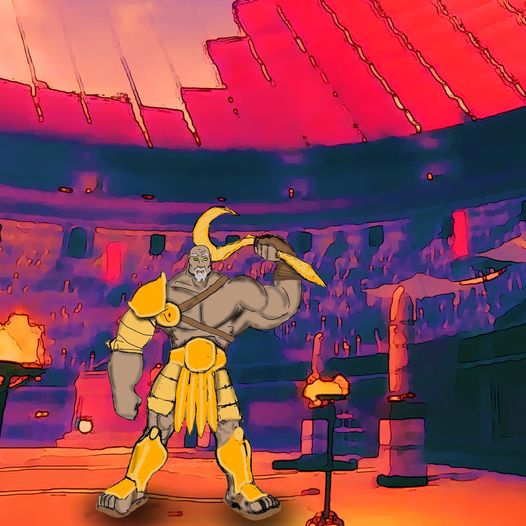 Upon awakening at the EXCELSIOR, Odin Thunderhammer the Dwarf Fighter, Weddumlir Aleshield the Dwarf Shield Knight , Davroar Hollysword the Elf Cleric of Moriarty, Nathan Garney the Human Cleric of Everly, Meldor Ironforge the Dwarf Wizard, Acindor the Human Fighter and Thril Wolfsbane the Elf Fighter  make their way back down to the bar to speak to Otuk the Innkeeper again. Otuk is making eggs. The eggs are yellow with purple spots and about the size of a gnome’s head. The tavern was mostly empty except for the two minotaur bouncers they’d noticed the night before. Davroar noticed that they weren’t really playing checkers, but were simply pretending to do so while they kept a wary eye on things.

In light of the deadline given by Joe Stufts the Necromancer Taxidermist to Nathan and Odin, they asked Otuk if he had ever heard of Obscurus.

Otuk scoffed. “Have I heard of Obscurus? Who hasn’t? He’s not nearly as obscure as his name suggests. In fact, he’s kind of rich. Owns a big mansion out of Peacock Island with one of them big telescopes. An observatory, I think it’s called. He calls it his STAR TOWER. Obscurus is an odd one. Likes gadgets and gizmos. Tries to pass himself off as an ordinary merchant but everybody knows he’s a high level wizard of some sort.”

“Do you know where we can find him?” Acindor asked.

“Probably on that island he owns. It’s just off the NORTH PINCER of CLAW ISLAND. The EXCELSIOR is on the SOUTH PINCER of the CLAW. You need to head toward the ROSE COLISEUM to reach it.”

As they made plans to leave, they noticed that Odin was missing. After a brief search, they asked Otuk if he’s seen Odin. The innkeep shrugged. “This sort of thing happens all the time. People vanish. Sometimes they’re trying to vanish. Sometimes that’s somebody else who wants it. Did he owe anybody money? Did he owe someone a debt of some sort?”

Recalling that Odin was a follower of Baldnoggin, Wedd sought guidance from the dwarf god and found that Baldnoggin was annoyed that Wedd had chosen to fight for Hero in the probable forthcoming Gotternacht Games. He was only assuaged when Wedd agreed to be Baldnoggin’s Champion instead. Wedd was also assured that Baldnoggin had sent Odin on a different mission in case Wedd failed.

This minor mystery solved, they made their way toward the ROSE COLISEUM. They were immediately recognized by the Coliseum guards, who recognized Thril and Weddumlir as chosen Champions in the forthcoming Gotternacht Games. This fact was made undeniable, as the Champions’ faces and names were emblazoned upon banners as Champions of their Gods. Fortunately, the guards only wanted their autographs. They also introduced them to Gnome Shanorock the Dwarf Rogue, the Champion of the Nylbogia. After a brief introduction, the guards convinced the adventurers to enter the COLISEUM to take advantage of combat practice and complimentary healing potions.

The Master of the Games

They were taken through a side door, partially hidden in the shadows. They noted that the guard knocked four times before entering. After threading a passage in single file long enough to suspect ambush, they emerged in the bright sun of main floor the COLISEUM.

As promised, there were cabinets filled with healing potions and racks of weapons around the sides of the arena floor. At the center of the COLISEUM, an elderly, muscular figure in golden gladiator attire was beating the living snot out of another combatant who looked to be at least half-ogre. The old man wielded a weapon that looked much like an over-sized hook, which he used to drive the other combatant’s skull into the ground with one last blow. Yelling for a medic, he turned his attention to the newcomers.

“Ah! These must be the new Champions in need of training,” he called.

Unflinching, Wedd drew his war hammer and rushed forward to meet him. The old man somersaulted aside, taking a glancing blow before sweeping Wedd’s leg with his hook. Lying prone on his back, Wedd wheezed, “That was fun.” Seeing that the old man’s hook was already driving down towards his belly, Wedd sprang to his feet and dodged. The hook weapon dug into the dirt floor. “Muttering “Loser” under his breath, the dwarf stepped in to finish the old man, but then quickly backpedaled when he realized the other was already hurling a weighted net at him. The net wrapped around Wedd’s torso, cocooning him in its embraced. he dropped to the ground like a stone.

The old man retrieved his hook and leisurely walked over to Weddumlir. Bopping him lightly on the head with the hook, he asked, “Who’s next?”

As Gnome Shanarock approached, the net magically unfurled itself from Wedd’s form and flew back to the old man’s hand. “I’ll give you the first shot,” he said.

Wasting no time, Shanarock thrust with his rapier. The blade struck true.

The old man gasped and clutched the wound. Shanarock was already back in position, his rapier ready to parry whatever the old man threw at him. Grinning, he said, “You have potential.”

Thril was next. He too managed to score a hit on the old man, but the old man’s hook caught him by the throat in the very next breath, nearly separating his head from his shoulders. Yelling for a medic, the old man turned to appriase the adventurers. “The ring is an unforgiving place. You must not allow any opportunity. You have potential, either to succeed or die. This was just a bout between fighters. You need to be prepared to face wizards, warlocks, barbarians, and… well, the rogue managed to bloody me before any of the rest of you! Do not underestimate anyone. Be ready for anything! If it comes to the Contest, and Wanjo has yet to give us any indication that this will not end up being the case, you won’t just be fighting on the arena floor. The arena changes with each match. For example,” he said, clapping twice.

The flat sand-covered arena floor vanished and became a series of multi-leveled hexagonal platforms. He clapped twice again and those platforms began to move up and down as lava slowly began to rise.

As they considered these things, a bolt of lightning struck the center of the COLISEUM. A very large, very angry Hero stood glowering at Weddumlir. He jabbed his finger at the dwarf.

“What is the meaning of this? I hear that you have betrayed me for Baldnoggin!”

“You’re sorry? Then you’re going to be fighting for me then?”

“You would say no to a god?” Hero asked, not bothering to cover the menace in his words. “I had dibs!”

“I will talk to my god about it then,” Weddumlir offered.

Hero shook his head. “Oh, no. Dibs may mean nothing where you’re from, but the dibs of a god are dibs indeed!”

Weddumlir apologized again, but refused to change his allegiance.

“Still no? Then I will make your life a misery.”

Hero scoffed. “I can feel you praying to the miserable little backstabbing cretin. You will stop praying this instant.”

Hero’s patience was at an end. A twenty foot square beneath Wedd’s feet erupted in black tentacles. Wedd desperately squirmed to get free while Hero taunted him.

“Are yous till praying? Are you still determined to be a Champion for that backstabbing dwarf-god?”

Wedd fought on, but the tentacles knocked him down and wrapped around him, squeezing him like a constrictor.

“You’re willing to die for Baldnoggin then?”

Wedd managed to break free from the tentacles but he was starting to take Hero seriously.

“This is your last warning,” Hero said. “Forswear, Weddumlir Aleshield: ‘I will fight for Hero and will not change sides again. May B.O.B. take my soul if I do.'”

Hero considered this. “So he did.” Black tentacles erupted beneath Acindor’s feet. “I will give you the same opportunity I gave this coward. Will you fight for me as my Champion in the Gotternacht Games?”

“I will!” Acindor agreed quickly.

The tentacles vanished and posters appeared all over the arena boasting Acindor as Hero’s Champion. “Spectacular! As a sign of goodwill, I shall allow your treacherous friend to live. I hope you two do meet in the Games so that they may sing songs of how you defeated Baldnoggin’s unworthy backstabbing Champion.”

The Master of Games sighed deeply. “There has been entirely too much drama here today. I will see all of you at the appointed time.” He gestured toward the exit.

Hero offered him a nod of respect and then vanished in a bolt of lightning.

Taken aback by the god’s treatment of the Master Gladiator as an equal, Davroar walked over to him and asked, “Sir, might I ask your name? I am interested to know who Hero would bow to?”

“I’ve gone by many names. I am the master of all martial forms and, as such, I am the one god who is disqualified from this Contest.”

Davroar thanked him for the information and beat a hasty retreat, realizing he was just speaking to Gilgamesh, the deposed god of Erythaean.

Gilgamesh was deposed by Valiant Thor, the Lord of the Burning World before Noah, gnomish god of craft and industry. He was known as a mighty conqueror and had indeed gone by many names, inspiring legends of great military heroes or else inspiring such heroes to victory with his blessing. Valiant Thor was able to best him by treachery and with the aid of the Lords of the other six worlds, who feared his growing power and lust for conquest. Aided especially by Zephyr of Nubis, Valiant Thor was able to trap him in an illusion where Gilgamesh constantly found himself fighting endless foes and monsters standing in the way between himself and Valiant Thor the Dreamweaver. When he finally defeated the dreamscape, he was released from the illusion, only to find that he had been deposed as the god of Erythaean for the past 40 years. Valiant Thor allowed him to depart Erythaean to the Farrago, where he apparently took on the role of Master Gladiator at the Rose Coliseum.

Davroar quickly and quietly told the others what he’d discovered. Grabbing a couple healing potions apiece on their way out, they left the ROSE COLISEUM and continued their quest.

As they left, the guards accosted Acindor for his autograph and advised them that they were on wanted posters everywhere. As a COLISEUM guard, he could care less but he advised them to avoid the streets and stick to the beaches. Gnome Shanarock decided to join their quest.

At the northernmost point of CLAW ISLAND, they sent Gnome Shanarock to scout out information on Obscurus’ location, mostly because his face wasn’t on any wanted posters. After negotiating his fee, Shanarock questioning the locals and was able to determine that Obscurus lived on one of two islands: PEACOCK ISLAND and the ISLAND OF ABOMINATIONS. He was able to locate a boat that would take him to PEACOCK ISLAND, but no one would go near the other island.

After locating the boat, they paid the captain for passage to PEACOCK ISLAND.

There, they spotted a cloaked figure with glowing green eyes who was marked with the essence of the Nylbolgia. The figure retreated when they spotted it. Gnome Shanarock decided to track the figure down.

They also spotted a crate filled with a lot of all-too-familiar cursed dolls.

One thought on “Session #26: Claw Island”